Exercising is something not everyone enjoys. A fitness tracker, like the Fitbit One, can make those dull fitness routines a little more engaging. If you're preparing for a marathon or an event to support a cause, you need to see how you're improving on time/distance daily.

For those who want to shed a few pounds, monitoring your stats and improvement provides invaluable information to help you reach your fitness goals. Fitness trackers can also help you set new goals, and they allow you to compete against yourself. The Fitbit One claims to do all of those things and more, but does it? 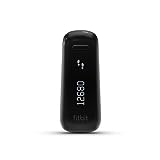 About the Fitbit One

The Fitbit One is an activity tracker. It is also capable of tracking the wearer's sleep patterns at night. The all-day device tracks distance, steps taken, calories, sleep, and the number of floors users climb daily. It features a large OLED screen which shows a clock on its face. Users can scroll through the stats above, throughout the day to check their progress. The battery life lasts up to two-weeks. And, once it dies, it takes a couple of hours to recharge.

It also features a silent vibrating alarm. The alarm slowly wakes the wearer up in the morning, rather than a loud signal which can distort sleep patterns. It is dust and splash resistant; however, it is not suitable for swimming and isn't water resistant.

A nice feature of the Fitbit One is that it is a wrist-free device. Users can attach it to shorts, a sports bra, or other clothing, for more accuracy in tracking. This feature helps reduces vibration, meaning it won't track steps if the wearer shakes their wrist or makes sudden movements. Other fitness trackers aren't as accurate. The tracker is comfortable to wear and is lightweight, so it's barely noticeable when exercising or performing activities throughout the day. However, if the clip that holds the Fitbit One comes loose, it can distort readings.

The Fitbit One can store data for a period of up to 23-days. It can store up to seven days of detailed data (including mileage, running speeds, etc.). To sync the information, owners merely connect the Fitbit One to their Mac or Android devices. Doing this allows owners to keep a running tab of the information they want to use, to improve stats. And, it also allows them to free up space on the fitness tracker, to store new performance metrics.

Connectivity and the Fitbit App

Bluetooth 4.0 instantly syncs information from the Fitbit One to Apple or Android devices. The device is compatible with over 200 devices. iPhone, iPad 3 (or higher), Windows phones, and hundreds of Android devices. As long as the piece is within 20 feet of the fitness tracker, it automatically syncs. Owners can also sync directly to a PC or desktop using the USB cable. As long as there's an internet connection, the information saves automatically.

A fitness app is also available for the Fitbit One. It sets daily goals to help individuals stay motivated and outperform their records. It has a MobileRun feature. This feature highlights maps and routes, allowing runners to store the trails they like best. It can also sync with calendar dates, so individuals can schedule specific workouts to track at a later time. For those who need inspiration or want to remain on track, the app is a nice feature to use.

How Fitbit Compares to Other Trackers

Comparing more than one fitness tracker gives consumers a better idea of the features, design, and utility of each product. In addition to the Fitbit One, these are a few other great options runners and athletes should consider.

The Polar H7 fitness tracker includes a heart rate strap, to better monitor fitness tracking capabilities. The monitor provides live, accurate heart rate readings. It is also compatible with mobile fitness apps using Bluetooth connectivity. The tracker is waterproof, and tracks swimming, running, biking, jogging, walking, and gym exercises. It is compatible with Android and Apple products. It has the Gym Links tracker, which is consistent with most fitness equipment at a gym.

The multi-sport fitness tracker has built-in GPS and tracks several metrics to help wearers reach their goals. Steps, distance, calories burned, incline, and some weight lifting exercises, are some of the activities it will track.

The tracker is waterproof up to five ATM (atmosphere) or up to about 50 meters in depth. The heart rate tracker gives a reasonable assessment of how hard the individual is working out, for reasonably accurate readings. It also features a one-button start tracking app, allowing users to transfer and store data on their Apple or Android devices. 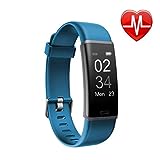 Although it isn't one of the most well-known names in fitness tracking, the wrist tracker is relatively accurate. The tracker is available for men, women, and kids. The tracker is water resistant and has a built-in heart rate monitor. It is compatible with both iOS and Android devices. The fitness tracker is available in nine colors so that consumers can find their favorite color for everyday use. All-day tracking records steps, calories, distance, and heart rate changes throughout the day. 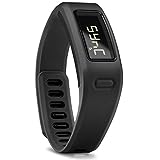 Garmin is a name-brand which is synonymous with accuracy and precision in fitness tracking. The Vivofit is a slim band which tracks activity during the day. It is available in a bundle package or on its own; the bundle comes with a pair of wireless headphones.

The tracker has a "Move" bar which alerts wearers when they've been still or immobile for too long. It goes off every 15-minutes of inactivity. The owner can change the amount of time, and can also shut off the Move alert. The easy to read display is bright and features a backlight, so it is visible in dark conditions. It provides calories, distance, steps, and total stair climbing readings.

A pulse-continuous heart rate monitor ensures the most precise readings throughout the day. Users can track activities like running, jogging, swimming, and gym workouts. Calories burned, distance, speed, acceleration, and stair climbing, are figures which the tracker saves throughout the day.

A nice feature is that it can sync with Myfitnesspal. This allows owners to track calories they consume. The information provides a more assessment given it tracks calories in and calories out. It syncs with Garmin Connect and is compatible with Apple and Android products.

However, the Garmin Vivofit is also pretty fantastic. It is simple in design but highly accurate. It is also one of the most well-known names in fitness tracking. The Connect app is a bit pedestrian and not as precise as others, but works sufficiently for most owners. It also has the Move bar, which pushes you t move more. This feature forces you to get up rather than remain at your desk, sitting at work all day.

You can't go wrong either way.