Are you looking for a backpacking water filter? There are hundreds of them on the market today, but finding the best option is a daunting task. There’s no way you can survive in the wild without the basics: food, shelter, and clean water. If you’ve ever experienced stomach parasites, then you understand just how critical clean water is. If you haven't, you never want to.

Water naturally contains biological pathogens that can damage your body and digestive system. Instead of allowing dirty water to ruin your backcountry trip or hiking experience, you’re better off packing a water filter. Trust me, nothing ruins a good backcountry trip quicker than giardia.

We’re quite fussy about the quality of binoculars we choose. Enhancing your visual field is a Faustian bargain if you’re gaining a migraine with your newfound far-seeing ability. To be the best binoculars on the market, the product had to have features that outweighed its cons, a reasonable price, and a favorable brand reputation.

What Is a Backpacking Water Filter

In simple terms, a backpacking water filter is a device that’s used to remove unwanted substances like bacteria, protozoa, viruses or harmful chemicals from drinking water. It is essential if you intend to go on a multi-day outdoor adventure. It works by filtering out the bad and letting only clean water pass through, allowing you to drink clean water right away. Most water filters require pumping or squeezing, which can be pretty annoying.

If you plan on venturing into areas where untreated surface water may be your only source of drinking water, then a backpacking water filter is a must. Water treatment is the only way backpackers can avoid picking up unpleasant illnesses caused by pathogens that hide in the water. Unless there's a sign that clearly states the water is safe for drinking, you must take precaution and treat it.

How does a backpacking water filter work?

A backpacking water filter contains an internal element, with microscopic pores specifically for catching debris and biological pathogens, preventing you from ingesting them. Also included in a water filter is activated carbon that effectively removes unpleasant tastes while reducing chemical contaminants.

Pump style filters come with a prefilter that removes large particles and debris from the water to improve the treatment process. Prefilters are useful in maintaining your pump filter’s flow rate, thus extending its life, and improving the effectiveness of chemical treatments. Its effectiveness for this purpose is determined by the size of the openings in the filter, also called microns.

Are backpacking water filters any different from purifiers?

The difference between a backpacking water filter and a purifier lies in the size of the microorganisms each can combat in the water. A water filter removes biological pathogens such as protozoan cysts such as cryptosporidium and giardia, bacteria, and parasites. On the other hand, a purifier eliminates all these pathogens plus viruses, which the filter doesn’t remove because they are too tiny to effectively catch. Water filters utilize a pump mechanism that takes some energy to pump water through the filter; thus it’ll need some periodic maintenance and cleaning.

Why should I use a backpacking water filter over other filtration methods?

There are several other ways of filtering and purifying your drinking water while on the trail. Some of these methods include boiling, using chemicals or water purification tablets, or using a water purifier.

Boiling is the traditional method of purifying water, and it is highly effective. However, it is time-consuming and uses a lot of fuel to boil enough water, and has a negative effect on the taste of the water.

Chemical tablets are good at killing bacteria and making water safe for drinking, but they also affect the taste because they contain iodine, which makes water taste bitter, with a lingering aftertaste. They also have a limited lifespan once you open the bottle, plus they don’t work fast during cold weather and don’t always work on certain types of pathogens.

A purifier, as stated, is great for neutralizing bacteria, protozoa and especially viruses in just a few seconds, especially the ultraviolet purifier. Therefore, a water filter comes in handy due to its portability, ability to capture and remove contaminants, doesn’t require much effort, and it keeps the taste of the water palatable.

What to Look for in a Backpacking Water Filter

Water treatment goes a long way in maintaining your health while out on the hiking trail or the outdoors in general. Water sources vary in terms of safety levels for drinking water, but that doesn’t mean that a pristine-looking source can’t make you sick. What makes for a good backpacking water filter? Consider the factors below when selecting one for your next backcountry trip.

It is important to know the difference between a water filter and purifier. The main difference is in the size of the pathogens each fight. While purification eliminates viruses, filtration removes bacteria and protozoa, while removing debris and silt to ensure the water is more pleasant to drink. Purification, however, doesn’t remove the debris and silt.

Some water filters are easy to set up, while others require your full participation such that you’d have to filter the water by pumping it or squeezing physically. The type of filter also matters because some are ceramic and shouldn’t be exposed to extreme weather temperatures.

You can also use a prefilter, like a cloth or a bandana, depending on how congested the water is so that you don’t clog up the water filter itself before filtration. Other considerations include the reliability and endurance of the backpacking water filter, the type of chemical treatment you are using, and the average filter life.

The pore size is the size of the holes in the water filter through which the water passes and is squeezed. The smaller the pore size, the better to capture pathogens while permitting the passage of water. Before buying a backpacking water filter, especially mechanical ones, review the pore size (measured in microns) against the size of pathogens to be filtered out as not all filters can remove all pathogen types.

5. Weight of the backpacking water filter

For any backpacker, just like other travelers, weight is significant when it comes to all your gear, and your backpacking water filter isn’t an exception -- especially for longer trips. There’s usually a tradeoff between the weight and speed of filtering, but a small and light filter will tend to take longer to filter the water.

6. How long it takes to filter a liter of water

There are speedy water filters, and there are those that take some time. What you need to consider here is how many people you intend to filter water for, because you’ll need more time in such a case. While using chemicals can purify large volumes of water, it can take longer to do, compared to a backpacking water filter that can do it within minutes. Ultimately, you’re here for the experience, so you want a treatment method that will help you save on time too.

Water filters have a filtering element which when used over time tends to wear out and will need replacement. In some cases, both the water filter and its unit are disposable, and thus need to be replaced entirely after its lifespan. The price of the filter and replacement cartridges is also something to consider along with their availability.

Lifestraw is a straw-style backpacking water filter best for personal use. The solo straw is dipped into a water source, or into a water bottle, and removes almost 100 percent bacteria and protozoa. You can wear it around your neck with its lanyard or stash it on your hip belt for on-the-go drinking while hiking, or in case of emergencies. You can buy it on Amazon, or you could purchase it from the Lifestraw brand website.

The Sawyer Mini Water filtration system is a straw-style and squeeze backpacking water filter, so you get two types in one. It is great because you can attach it to the reusable squeeze pouch and drink directly from the filter, or, you can squeeze the water directly into a water bottle. It screws onto most disposable water bottles and attaches inline on a hydration pack without the need for adapters. You can also sip from the personal drinking straw and drink directly from the source. It also removes almost 100 percent of bacteria and protozoa.

The Katadyn is one of the bestselling water filters, with a great niche that other backpacking water filters don’t fill. It is the best pump water filter for use in small and shallow water sources, besides being light, sturdy and fast. If you plan to go on a multi-day backpacking trip with three or so people, this filter will fit snugly in your backpack. It uses an active carbon core to eliminate bad odor or taste and reduce chemicals while removing pathogens and silt at a liter per minute (48 pumps). It has a bottle adapter and can filter up to 1,150 liters of water. 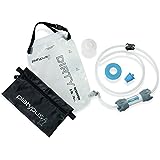 The Platypus Gravity Works is a complete water treatment filtration kit that has two four-liter water reservoirs, a water filter, and connecting hoses. It is ideal for filtering large quantities of water quickly at a speed of over one liter per minute while removing pathogens and particles. This makes it the most efficient backpacking water filter for large groups of people.

Survivor filter pro is a portable backpacking water filter great for camping, hiking and emergency. It filters water in three stages, with two cleanable 100,000-liter membranes and a carbon filter to eliminate bad taste and odors. It filters fresh water, which you can also store for emergencies, and is ideal for one person or larger groups.